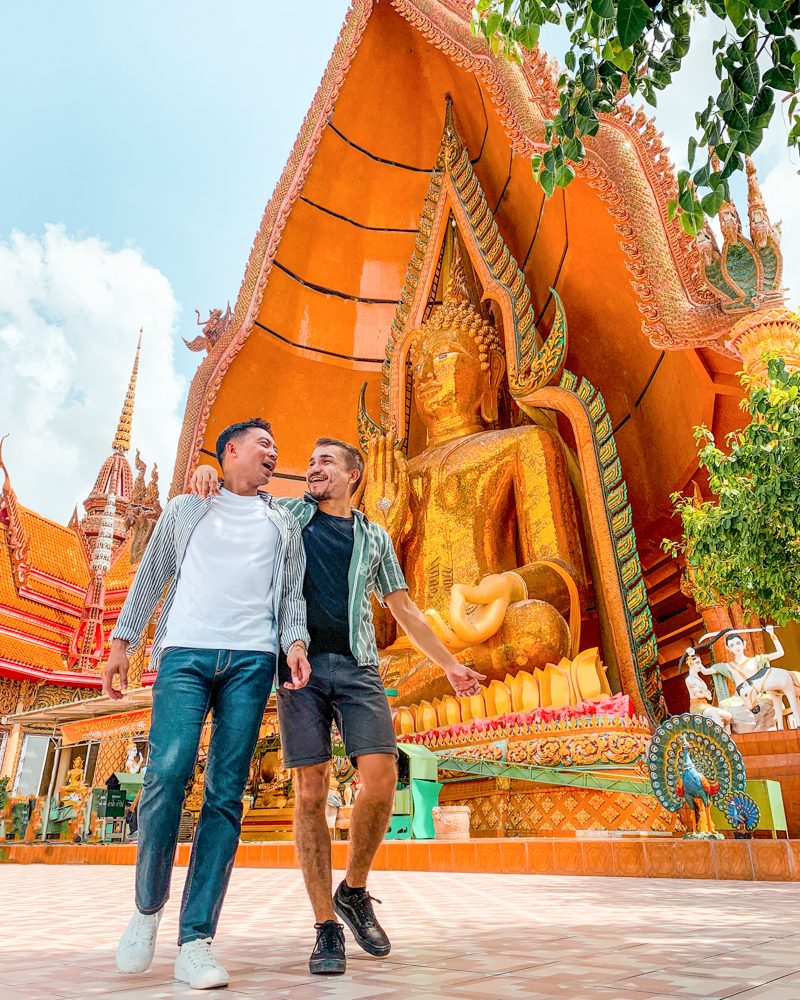 The temple is large and multi-level, and there is even a funicular to climb up, although it wasn’t available when we came. 157 leading up steps are decorated at the edges with nagas. Upstairs there is a large 18 meters high statue of a seated Buddha, near which most of the tourists and believers usually gather. There are also several more statues and offerings in the form of a lotus flower, incense, and gold leaves, which anyone can buy and use in a simple ritual, which tourists also do with pleasure.

Besides this statue, there is still a lot of interesting things around the temple territory. You can climb to the very top of one of the pagodas (the climb is carried out along a spiral staircase inside), from where a wonderful view of the surroundings and the neighboring Chinese temple opens. A special shrine is kept at the topmost level of the pagoda. Also, do not forget to find the entrance to that very tiger cave. The cave itself is small and filled with shrines and tiger figurines. On one of the walls in the cave, you can see many coins inserted into the cracks. You can also leave a coin here for good luck and for the gods to be supportive.

According to legend, a huge tiger lived on the hill. He growled all over the area, frightening residents. But one day the monk, looking for shelter during the hostilities, wandered into the tiger’s den. The beast of prey did not touch him. So they lived together, a tiger and a man. Then the monks chose the tiger cave for meditation. And then temples and pagodas were erected here.

In fact, there are two temples on the hill, united into a single temple complex. One, Wat Tham Sua, is built in the style of Thai architecture, and the second, Wat Tham Khao Noi, is in Chinese style.

The Tiger Cave Temple (Wat Tham Suea) is located 15 kilometers from the center of Kanchanaburi. Public transport does not go here, so you can only get there by taxi or rented transport. Many group excursions to the River Kwai include a visit to the temple.

You can completely freely move around the Wat Tham Suea temple and inspect whatever you want, but only monks are allowed to enter some rooms. To enter the buildings of the temples, you need to take off your shoes, and to visit the entire complex you should be dressed appropriately: miniskirts, shorts, and top tanks are not allowed.

iThere are no comments